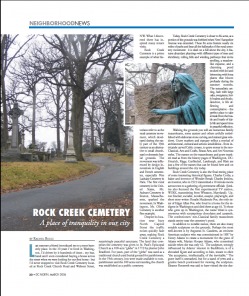 Rock Creek Cemetery: A Place of Tranquility in Our City
By Rachel Bucci, DC North, March 2006

Last summer a friend introduced me to a most heavenly place. In the 10 years I've lived in Washington, D.C. I'd driven by it hundreds of times - my husband and I even considered buying a house across the street when we were looking for our first home – but I'd never stopped to visit Rock Creek Cemetery located at Rock Creek Church Road and Webster Street, NW. What I discovered there has inspired many return visits. Rock Creek Cemetery is a prime example of what historians refer to as the rural cemetery movement, which developed during the early part of the 19th century as an alternative to small churchyard or domestic burial grounds. The movement was influenced by design innovations in English and French cemeteries, especially Père Lachaise Cemetery in Paris. The first rural cemetery in the United States, Mt. Auburn Cemetery in Boston, Massachusetts, sparked the movement. In Washington, D.C., Mt. Olivet Cemetery is another fine example.

Despite its location near busy North Capitol Street the traffic noises quickly fade away, making Rock Creek Cemetery a surprisingly peaceful sanctuary. The land that comprises the cemetery was given to St. Paul's Episcopal Church as a 100-acre “glebe” in 1719 by planter John Bradford. For years, part of the glebe was used as a traditional church yard burial ground for parishioners. In the 19th century, lots were made available to non-parishioners and the 100 acres surrounding the church was established as a public cemetery.

Today, Rock Creek Cemetery is closer to 86 acres, as a portion of the grounds was forfeited when New Hampshire Avenue was extended. These 86 acres feature nearly six miles of paths and bear all the hallmarks of the rural cemetery movement: it is sited on a hill above the city, it features abundant plantings with different types of trees and shrubbery, rolling hills and winding pathways that invite strolling, a meadow-like expanse, and a charming pond stocked with koi and brimming with lotus plants that bloom profusely during the summer months. The naturalistic setting, lush with large oaks, evergreens, holly bushes and rhododendron, is life affirming and contemplative – the perfect place to take a break from the hustle and bustle of daily life and spend time in peaceful reflection.

Walking the grounds you will see numerous family mausoleums, some austere and others artfully embellished with elaborate stone carving and stained glass windows. Grave markers and statuary reflect a myriad of architectural, cultural and artistic sensibilities - from intricately carved Celtic crosses, to grave stones in the neo-Classical, Arts and Crafts, Beaux Arts, and Art Nouveau styles. The names on the mausoleums and grave markers read as from the history pages of Washington, DC: Heurich, Riggs, Garfinckel, Lansburgh, and Blair are just a few of the names that can be found here and on buildings around the city today.

Rock Creek Cemetery is also the final resting place of some interesting historical figures. Charles Corby, a baker and inventor of Wonder Bread; Charles Jenkins, an inventor, who in 1925 transmitted a 10 minute movie across town to a gathering of government officials (Jenkins also licensed the first experimental TV station,W3XK, transmitting from Wheaton, Maryland); Upton Sinclair, socialist, novelist, essayist, playwright, and short story writer; Rosalie Mackenzie Poe, the only sister of Edgar Allan Poe, who lived in a home for the indigent in Washington and died there at age 64. To those who grew up in Washington, the name Velati is synonymous with scrumptious chocolates and caramels. The confectioners' neo-Classical family mausoleum stands sentry near the cemetery's pond.

In addition to notable names, there are also many notable sculptures on the grounds. Perhaps the most well-known is by Augustus St. Gaudens, an eminent American sculptor who was commissioned in 1887 by Henry Adams to create a monument for the grave of Adams wife, Marian Hooper Adams, who committed suicide when she was only 42. The sculpture, strongly influenced by Adams' interest in Buddhism, is of a shrouded figure and according to him, meant to elicit “the acceptance, intellectually, of the inevitable.” The grave itself is unmarked, but for a stand of yews and a granite bench positioned for viewing the sculpture. Eleanor Roosevelt was said to have visited the site during times of personal crisis. Another striking sculpture, “Rabboni” by Gutzon Borglum, the sculptor of Mount Rushmore, marks the grave of Charles Mather Ffoulke, a Washington banker and tapestry collector.

While Rock Creek Cemetery is non-sectarian, an enclave serving the needs of Washington's Russian Orthodox community has developed on the eastern edge of the grounds. A recent addition is a small chapel built by the parishioners of the DC-based Russian Orthodox Cathedral of St. John the Baptist. Built in 12th Century Novgorod style, the chapel memorializes the deceased founders and benefactors of the Parish of St. John the Baptist, and those Orthodox Christians interred at Rock Creek Cemetery. Parishioner and architect Irina Vladimirovna Zarechnak designed the chapel, which was consecrated on September 10, 2005, and is adorned inside and out with mosaics. On the Western façade is the Iveron Icon of the Mother of God and on the Eastern wall the Icon of the Savior Not-made-by-Hands; both were created by Alexander Sokolov, a Muscovite iconographer.

According to David Charles Sloane, author of “The Last Great Necessity: Cemeteries in American History,” the rural cemetery was designed as “a sacred space for the dead, and a tranquil spot, even a pleasure ground for the living.” Certainly, when Rock Creek was originally developed, it fit this description. During the 19th century it was located on the outskirts of the city and provided the city's inhabitants a respite from the urban setting. What a happy surprise then, to discover that Rock Creek Cemetery still pleasantly serves its original purpose.

The entrance to Rock Creek Cemetery is located at the intersection of Rock Creek Church Road and Webster Street NW. The cemetery is open from dawn to dusk every day. The office is open from 9:00 AM to 5:00 AM weekdays and 9:00 AM to 1:00 PM Saturdays. A map of the cemetery with burial sites of interest marked is available at the office. For more information, visit www.rockcreekparish.org.